The James William Rivers Prize in Louisiana Studies is among the most prestigious awards in Louisiana Studies. It was established to honor persons (or organizations) who have contributed or rendered, recently or over the course of their careers, outstanding scholarly study, work, or teaching about the culture, history, art, architecture, crafts, flora, fauna, music, literature, law, performing arts or geography of Louisiana or about its people. The Rivers Prize, consisting of a cash award and other acknowledgments, was established with private funds donated in memory of Mr. Rivers, a New Orleans architect and graduate of USL (now the University of Louisiana at Lafayette), who died in 1991.

Nominations must be in writing and sent (before September 15th of any given calendar year) to the James William Rivers Prize Committee by email at cls@louisiana.edu, with the subject heading, "Rivers Prize Nomination." Please include documentation and/or reasons in support of any nominations. Nominations will be reviewed by a committee made up of representatives from the UL Lafayette College of the Arts, the College of Liberal Arts, and the Center for Louisiana Studies. Finalists not chosen to receive the Prize will automatically be considered by the Prize Committee the following year. 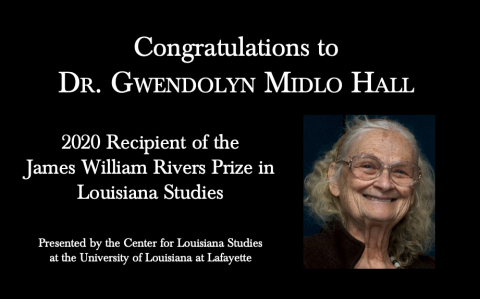